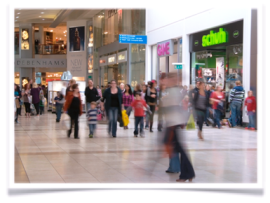 Who can fail to be touched by the withering into extinction of the great British high street and, to a lesser extent, its anodyne successor the shopping mall? Retailers are closing-down and shops are being boarded-up as ever more of us choose to do our shopping online.

And it is not that difficult to see why. Online shopping, for most of us, is a lot more convenient, it is quicker, cheaper and offers far wider choice without having to leave the comfort of our own home. This is particularly the case for products that are bought on specification (electrical goods, cameras, computer equipment, etc.) where it is easy to research and read reliable reviews before buying exactly the right product at a considerable saving over a retail store. Few of us would miss the ‘personal service’ that surrounds the purchase of such products which, to be honest, usually amounts to some spotty youth reciting a sales script before trying to flog you a product protection insurance you don’t need.

Sadly, it was only a matter of time before the likes of Comet and Jessops were squeezed out of existence.

But what about the other sectors coming under pressure, in particular, what about clothing? Surely few could have predicted that so many of us would be buying clothes online to the extent that we now are? After all we need to try clothes on, to check the fit, the colour, the fabric? Yet the market for some online clothing retailers has been booming (not just the Asos phenomenon, but the rise of niche players like Coggles, Boden, Joules, etc. as well as the online offerings from high street retailers), it seems that more of us than expected are willing to take the risk and order clothes before actually seeing or trying them first.

It might have been an inevitability waiting to happen, but the growth of this market points to something more than passive acceptance. It suggests a degree of discontentment with the former retail offering which is better satisfied by the new online providers. Perhaps high street retailers have hastened the revolution by failing to offer what their customers were looking for, giving their online competitors important footholds in their markets? So what exactly have they been getting wrong? Three things: choice, service and trust.

Firstly, choice. The British high street lost its individuality years ago, 80% of shops are chains selling identical merchandise everywhere (most of which they now also sell online). But a more insidious reason why the choice on the high street is rather predictable, is that retailers are inherently risk averse. They seem more interested in looking over their shoulder at what their competitors are doing than looking ahead at what the customer wants. So, if an item appears to be selling well in store A, store B (its key competitor) is desperate to have exactly the same item, rather than taking a risk on a different item the customer might actually prefer. The exceptions are the more visionary and innovative retailers who know what they stand for and how to engage their audience (Primark, Majestic, Poundland and John Lewis spring to mind) as well as the specialist independent retailers run by knowledgeable entrepreneurs, who know their customers’ needs and use their expertise to source merchandise that cannot be found in the chains. Although they are lamentably rare in the UK these days, some are now setting-up online where they can reach a wider, if less personal, audience.

Secondly, service. With a few exceptions, notably John Lewis (again), most UK retailers have become woefully slow and unwilling to help customers. Ironically, these days if the size/colour combination you want is not available in store most retailers will suggest you order it from their website rather than going to the trouble of getting it in for you. Even the former national post-Christmas of queuing for a refund at M&S has become a guilt-inducing ordeal with much tutting and shaking of heads before a refund will be conceded. Is it any surprise that John Lewis is bucking the retail trend, its loyal and satisfied customers keep coming back almost entirely because of the superior service they receive.

Thirdly, trust. With a few exceptions (notably John Lewis, yet again), we simply don’t trust retailers that much anymore. Do we really believe that suit was ever priced at £525 before it was marked down to £399, before being slashed to £249 and finally £199 in the ‘Blue Cross’ clearance sale? Would the store own-up if they knew that the chinos they were selling so cheaply were being churned-out by a sweat shop in Asia? And when we see ‘Bond Street’ or ‘Saville Row’ on a label why are we not entirely surprised to find, on closer inspection, a concealed tag confessing ‘Made in India’ (or some other location miles from London)?

Well, the web-based retailers ought to have an easy lead with the first point and there is certainly a lot more choice available online. But look more closely and you would be forgiven for thinking that the UK retailers who have set-up online seem to have taken their conservative me-too mindset with them, because they just seem to offer a bigger variety of the same things. Take men’s clothing and smart work shirts in particular. They are fairly regular, staple purchase, easy enough to browse on a website and most men know their collar size and sleeve length, making them an ideal product to buy online. The rise of online shirt merchants such as Charles Tyrwhitt, T.M. Lewin, Hawes & Curtiss, (et al) are testimony to this. But peruse their initially-impressive arrays of merchandise and it is hard not to feel a sense of déjà vu. Whatever one offers, they all offer. Where are the distinctive products, the fresh ideas, where is the innovation? It need not all be pseudo Paul Smith edgy, but must it all be so pseudo M&S bland? Part of the defence from such would-be genteel brands is their desire to maintain longstanding appeal built on classical British understatement, conservative taste, discretion and so on. But really, are they not all offering undifferentiated substitutes for one another? Have they not, in fact, created a commodity market for themselves where price becomes the primary differentiator (3 for £60 or 4 for £90?).

With respect to the second point, service, despite their remoteness, most online clothing retailers leave their their high street counterparts in the dark ages with hassle-free returns, refunds and helpful online assistance. This is where the bricks and mortar retailers ought to have the upper hand. But it is, for the most part, an opportunity missed.

Finally, integrity. Once again, this ought to be an area in which the high street retailer should shine. It doesn’t, but, frankly, neither do the online operations that we were just looking at. For example, they all offer a wide range of shirts all of which seem to be permanently reduced from £75-£85 to £25-£30. In one example, a newly introduced design for this season (see inset – and, yes, this brand new ‘slim fit blue dogtooth’ really is about as innovative as it gets) has, supposedly, been launched with a price tag of £85. No sooner has the stock arrived and it is slashed to £29, or you can have 4 for £90 (which, based on its make-believe starting price, is practically a buy 1 get 3 free deal). But let’s give them the benefit of the doubt, they are probably worth £85 aren’t they? After all, that is what you might expect to pay for a genuine Jermyn Street shirt isn’t it?

And these are genuine Jermyn Street shirts after all, the website says so, the label says so and they have a store in Jermyn Street. Well, the basic cut and construction of the shirt are, apparently, based on traditional designs (as, to be fair, are those in most shops), but the shirts are, allegedly (it is all rather hush, hush) made in places as far from Jermyn Street as Turkey, India, China and Vietnam. Not that we necessarily mind that much, especially if it keep the price affordable, but surely honesty is the basis of trust (ask John Lewis!).

Given that the target market for these products is supposed to be well-educated professional men, how long will they go along peddling the pretence? Probably until a better proposition comes along to displace it.

Perhaps if the high street hadn’t opened the door with its complacency, online retailers might not have stolen so much of their market – particularly the clothing market, which no one would have predicted a decade ago. But just as their predecessors’ introspection, lack of vision and inability to engage and inspire customers sealed their fate, is there not a risk that the same attitudes could, unchecked, yet come back to haunt the online generation?

Founder and Managing Director of Lucasbrand, a UK-based strategic brand consultancy with a diverse international client base. View all posts by Keith Lucas